There may only be two major satellite internet providers in the U.S., but internet users should still pay close attention to their options. Based on rural availability, reliability, price, speed and other relevant factors, one provider may be a better option than the other. We dove into the data to see which satellite provider is the best home internet for you if cable, DSL, or fiber-optic are not available in your area.

How we chose the best satellite internet

Satellite internet is best for those who live beyond city limits and don’t have access to faster speeds provided by DSL or cable. But living in a rural area shouldn’t limit you from having a solid gateway to the internet. As the satellite internet market has become increasingly consolidated, two major players are left: HughesNet and Viasat. These providers have the widest satellite internet availability in the country and outshine the competition, covering all 50 states and Puerto Rico. Customers in West Texas may also be able to access service from Big Bend Telephone Company. We suggest plugging in your own address to see what these providers offer in your area.

While traditional cable internet providers boast speeds in the triple and quadruple digits without a sweat, satellite internet maxes out at 100 Mbps because signals have to travel to space and back. If satellite internet is your only option, we wanted to make sure you have choices when it comes to internet speed and data caps.

We prioritized affordability in our search because satellite internet has never been among the most cost-effective internet providers out there. So we looked at the relative cost of plans from each provider for this satellite internet review, taking into account speed tiers versus data caps. HughesNet and Viasat both offer four internet plans with varying prices and maximum download and upload speeds. 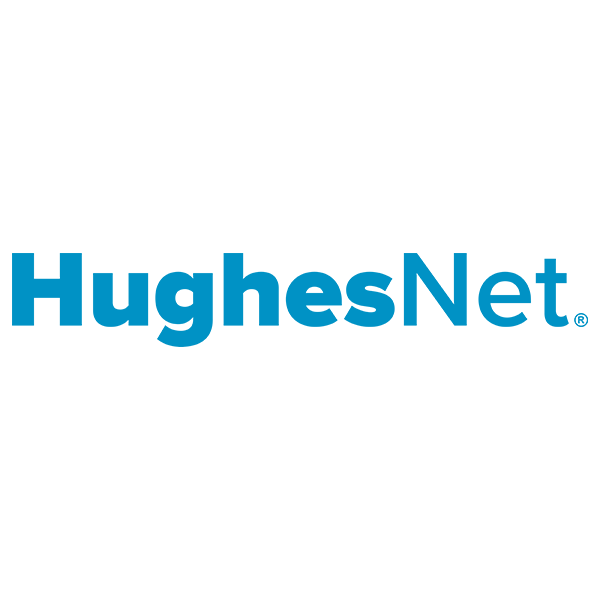 HughesNet does not have any hard data limits and all customers are offered speeds of 25 Mbps.  Keep in mind, though, that HughesNet will slow your speeds to 1-3 Mbps if you go over your chosen 10, 20, 30, or 50 GB monthly allowance, and speeds will remain at these levels until the beginning of the next billing cycle. Customers can purchase data tokens that never expire to restore speeds to normal levels (tokens are available in four sizes).

To offset the data throttling, HughesNet’s does offer access to 50 additional GB per month during what they call the “Bonus Zone” between 2 a.m. and 8 a.m. All data consumed during that time will not count toward your monthly allowance. While it’s not the most convenient time for internet use, this offer helps direct traffic during less congested times — and it gives you a window of time to download those large files or software updates that would normally drain all your data.

While traditional cable internet providers can offer much faster speeds, HughesNet and Viasat have, historically, been competing over speeds in the double digits, ranging from 12 Mbps – 30 Mbps. Viasat offers users the option to purchase a plan with speeds up to 100 Mbps per month — a feature HughesNet has yet to offer. However, HughesNet does offer 25 Mbps with all of its plans, even the cheapest ones. The company also plans to roll out a new satellite with 100 Mbps capability by 2021.

You can purchase your HughesNet equipment, satellite dish, and WiFi-enabled modem for about $400 with installation, or you can lease the equipment for $15 per month ($10 for the first six months of service). The installation has to be done professionally and costs are included in the company’s “Equipment purchase and standard installation” fee. We recommend buying the equipment upfront if possible. It’ll pay for itself in about two years — the required contract commitment for any HughesNet plan.

HughesNet isn’t known for its customer service, as many consumers mention unhelpful support and early termination fees. But this is pretty standard across the satellite internet market due to the nature of its slower speeds and limited capabilities. HughesNet does offer an extra customer service feature known as Express Repair with two tiers: Basic Service and Premium Service. Basic service includes tech help within two business days, and premium service includes tech help within one business day. Both plans expedite restoring service in the event of an outage or equipment malfunction.

Pricey
No option to purchase equipment

If your household is constantly streaming, gaming from several devices and downloading large files and you don’t have access to traditional internet providers, Viasat might be the best home internet for you.  As with HughesNet, satellite internet plans with Viasat have a tiered data allowance scheme. However, the allowances are larger; the highest tier has a massive 150GB of data per month (lower levels have 40, 60, and 100GB allowances).

Viasat also tiers its speeds. If your data needs are demanding enough to exceed 50 GB per month, Viasat starts to become a more realistic contender: Its plans are more expensive, but making up 100 GB of data with HughesNet’s add-on “data tokens” would add $300 to your monthly bill.

Viasat technically offers unlimited satellite internet on all of its plans, which sounds exciting in theory. In reality, customers who exceed their monthly plan limit (tiered, as explained above) are likely to see slowing for the remainder of the month. See the chart below for more information.

Like HughesNet, Viasat will start slowing your speeds if you “go over” your monthly data allowance, but it won’t cut you off or charge you more. Viasat lists the types of usage that might cause you to go over your data allowance, including extensive use of downloading, backup services, gaming and viruses or malware.

Once you get past introductory rates,  Viasat is a bit more expensive than HughesNet. However, you’re also getting more speed for your buck — particularly at the higher tiers of service. For instance, a HughesNet regularly priced plan at $100/month delivers 25Mbps download speeds with 30GB of data before slowing. A Viasat plan at $100/month also offers 25Mbps speeds, but 60GB of data before slowing. A $150/month plan bumps you up to 50Mbps and 100GB of data.  To get out of a long-term contract, the company requires a hefty $500 upfront payment.

No option to purchase equipment

With Viasat, you can’t buy your equipment like you can with HughesNet. You can either lease it for around $10 a month or pay $299.99 upfront for the life of the equipment. Either way, you have to return it when you cancel your contract or pay an unreturned equipment fee.

How to choose the best satellite internet plan

It’s best to start your search by asking yourself what you need most out of satellite internet. If you have several people in your home with several devices, you’ll need more speed to accommodate everybody. If you’re more concerned with price and reaching the limit of certain data allowances, that might lead to a different set of priorities. Once you answer these questions, it’ll be easier to narrow your search.

Determine how much speed you need

At 100 Mbps for its highest plan, Viasat currently offers the fastest satellite internet on the market. But do you really need that much speed? On the one hand,  100 Mbps for $200 per month is cheaper per Mbps than 25 Mbps at $49.99 from HughesNet. However, you can accomplish most streaming and browsing with slower speeds. Plus, maximum speeds of 100Mbps may not be available everywhere.  One of the biggest misconceptions in buying satellite internet is that having more Mbps leads to more usability. If you’re only using it for online shopping and social media browsing, you don’t need a lot of Mbps, no matter what the sales agent tells you. To help you gauge what you can do with different speed thresholds, check our table of estimated usage.

Figure out how much data you use

Data is measured in gigabytes (GB) and is used whenever you send something, receive something, download from, or upload to the internet. Satellite internet plans work similarly to your phone plan: Your data is your allotted internet usage. If you go over your data limit, you won’t be totally cut off from the internet, you’ll just be restricted to slower speeds (typically 1–3 Mbps) until the start of your next billing cycle. This will allow some web browsing, but no video streaming or file downloading — and that web browsing will be slow enough you may resort to the local paper for news and sudoku.

To give you some perspective, here is what HughesNet says you can do with 1 GB of data:

If you stream video at all, you’re more likely to struggle with these data caps. Streaming uses up a huge chunk of data. In fact, Netflix estimates you’ll need 1GB of data per hour to stream SD video. That’s 66 GB to binge all five seasons of Orange is the New Black — more than the top HughesNet plan of 50 GB/month

We suggest being mindful of your internet habits and see what activities you lean more toward – if you’re a heavy video streamer, you might want to invest in a heavier data allowance per month. HughesNet and Viasat provide you with ways to check how you’re doing on data within a given month.

What is satellite internet?

Satellite internet is a type of wireless internet connection in which data is transmitted between three points: a satellite in space; a ground unit called the network operations center (or NOC) at the provider’s hub; and a satellite dish located at the customer’s home.

How can you work around the limitations of satellite internet?

Jameson Zimmer from Broadband Now explained that there are two easy ways to maximize a limited ISP. The first: Avoid streaming video. This eats up data fast. Instead, get TV service from a dedicated TV provider. (And, pro tip: Netflix still offers DVDs by mail.) Second, use an ad blocker in-browser (we like AdBlock) to stop banner ads and unneeded videos from sucking up space.

If your options are already limited to satellite internet, your TV provider is probably satellite-based too — DirecTV or Dish Network. But no, you can’t use the same satellite dish for both. TV satellite dishes are only capable of receiving signals; internet connections need to both upload and download information.

In what case is satellite internet preferable over other options?

If you have the option for cable or DSL, it’s typically going to be better than satellite internet: cheaper, faster, no lag. But satellite might still be the way to go if you’re on the fringes of your DSL’s range.

DSL internet service relies on a customer’s proximity to something called a digital subscriber access multiplexer (DSLAM for short), the network device that connects you to the internet. These live in local exchange offices in your area, and the farther away from your DSLAM you are, the slower your DSL internet will be. It’s pretty rare, but service on the edge of a DSLAM’s range could be painfully slow — we’re talking 3 Mbps download and a fraction of 1 Mbps upload. If that’s the case for your home, satellite internet is obviously the better choice.

How is satellite internet customer service?

Trustpilot reports that HughesNet earns about 2.9 stars out of 5 from consumers. They note potentially slow speeds and expensive cancellation process as “cons” for signing up with the service. While Viasat also got 2.9 stars, with slow speeds and poor customer support as the main complaints. Bottom line: Satellite internet certainly has some catching up to do when it comes to customer satisfaction.

The best satellite internet: Summed up

Our Other Internet Reviews

Satellite internet companies not meeting your needs? Check our other reviews of internet types:

Lara Vukelich is a freelance writer for Reviews.com. Over the last 12 years, she has covered internet service, home goods, travel and more at Expedia, Huffington Post, and other publications.

DIYers Tell Us How They Built Their Dream From Scratch