Reviews.com Staff
Advertiser Disclosure:
We recommend products and services based on unbiased research from our editorial team. We make money via affiliate links, which means if you click a link on our site, we may earn a commission. Any commissions we receive do not affect our recommendations; if you want to know more about how that works, read more.

DISH Network Internet offers consumers the ability to bundle their TV package with high-speed internet plans from one of their partners. As a satellite company, it made sure to include a satellite internet option, which caters to those who live in more remote areas that do not have access to DSL, cable or fiber.

Not sure what to expect? Let us break it down for you with our DISH internet review.

DISH promises the best satellite TV and internet package in the industry, saying, “Not only do we have great internet available where you live, we have the best TV in the industry — all at a price the competition can’t touch.” On its internet performance specifically, DISH claims, “Connections are reliable, installation is professional, and customer support is available 24/7.”

DISH’s internet performance is tough to gauge because your location will determine whether you’re connected with Frontier or Viasat. With these options, DISH claims that up to 100+ mbps is available, but again, that is entirely dependent on location. While Frontier offers DSL and fiber-optic service, and claims to offer high speeds, reliable network, and the capability to support multiple devices, it is less available and less reliable depending on where you are located. For those in the right spot, it’s a great option. For more remote areas, Viasat’s satellite internet may be the best option. It may be slower than DSL or fiber, but Viasat’s unlimited rural internet data plans are a good deal.

All of DISH’s internet partners scored high in our lists of best high-speed internet providers and best cheap internet service.

DISH does have a reputable installation service. Customers are given a 75-minute window for when your technician will arrive, and you can track the exact time on DISH’s website. The provider’s customer support is indeed some of the best in the business, as well: Support is available 24/7, and DISH was the only internet provider to receive a five-star rating from J.D. Power in customer service. 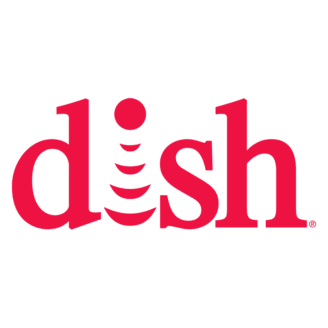 Both Frontier and Viasat offer unlimited data in their DISH Network plans. This is good news for those not wanting to get caught with an unexpected overage fee at the end of the month.

In general, satellite speeds are slowing down significantly. In a 2016 study (the most recent available), the FCC collected nationwide information on internet service provider speeds. It found that satellite speeds over the past years took a huge hit, while almost all other internet service options remained flat. The report states that Viasat’s went down from 107% to 71%.” The FCC concluded that this was the result of more homes using satellite internet, thus slowing down speeds nationwide.

A cell carrier is an unlikely challenger to satellite or fixed internet. For those willing to get creative and opt for a hotspot, this is undoubtedly an option. Verizon leads the pack of 4G LTE providers, and, like satellite internet, its coverage can reach almost every corner of the country. Verizon offers two ways to use its 4G LTE service on non-mobile devices: You can designate your cell phone as a hotspot and tether your other devices to it (like gaming systems, tablets, and laptops), or you can buy a mobile hotspot from Verizon, which costs anywhere between $20 and $100. The benefit of this is that you won’t have to pay for the additional TV service that you would with DISH.

Unfortunately, speeds and data limits for 4G Mobile Broadband providers are generally on the lower end. Verizon offers anywhere between 5 and 12 Mbps on its 4G LTE plan, slower than Frontier, and roughly on par with Viasat. Users will find themselves feeling less frustrated opting for a more traditional internet option.

Another popular option for homes in rural areas is fixed wireless internet, which beams data from an access point, like a mounted tower, to a reception device. These are usually small dishes or antennas installed on the outside of your home. The primary benefit to fixed wireless internet is that data caps tend to be much higher than with satellite internet, with many plans offering truly unlimited service. Activities like streaming HD video and online gaming tend to eat up the most data, so if these are some of your primary activities, fixed wireless may be the best option for you.

Speed is dependent on which internet partner you choose and where you are located. The speeds will vary, but overall, if Frontier is in a viable area for you, that seems to be the option with the fastest response and download speed.

If you want to learn more about service options available, check out our article about the different types of internet connections.

Should I go with DISH for satellite TV?

Whether you get service from HughesNet or Viasat ultimately depends on where you live, but either one means bundling with a DISH TV plan. If you’re more interested in satellite TV than internet, it’s worth noting that there are better options out there. While DIRECTV — the other major satellite TV company — has better packages and channel offerings, DISH stands out with unique features. DISH offers users access to over 80,000 on-demand titles at no extra charge, and it’s DVR capabilities are premium by being able to hold 2,000 hours of content at a time.

What should I know about the two-year contract?

It is essential to understand what you are signing up for when you opt for a contract. Users who sign the contract ensure that they have a lower promotional price in exchange for agreeing to be with that package for two years – similar to a contracted phone plan.  Once the contract ends, the price will go up, and should you want to end your contract early; there are charges involved with doing so. While not ideal, this is on par with other internet providers: Both Viasat and Frontier require two-year minimum contracts.

Should I choose Frontier or Viasat?

Which provider DISH partners with depends on your location, so you won’t have a choice which provider you get if you opt to bundle with DISH’s satellite TV. But if you’re only after internet service and either of these providers is sold independently in your area, it’s worth checking out. If Frontier is available in your area, we recommend it because of the significantly higher average download speeds they have over Viasat. Otherwise, their packages offer similar perks.

With its slower speeds and data limits, satellite internet should really only be considered if you live in a rural area without access to broadband. DISH is best for customers looking for a complete internet and TV package (since you can only access DISH’s satellite internet by bundling it with a TV package).

Read about the best internet in your area:

The Reviews.com staff is dedicated to providing you with all the deep-dive details. Our writers, researchers, and editors came together from Charlotte, Seattle, San Juan, Fort Worth, Fort Lauderdale, San Diego, and Chicago to put this review together.

The Best Internet Providers in 2021